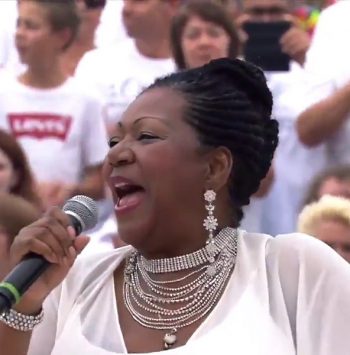 Boney M with Liz Mitchell were invited to participate in a live German TV show on ZDF. The famous band of Boney M feat Liz Mitchell performed a stage concert in a popular entertainment show Fernsehgarten. It was a great honour to sing for the multi million army of fans.

The last summer weekend, 28 August 2017 was spent in Mainz, where Boney M were singing live with their fans on ZDF. In spite of being really tired after a show in Hungary, Boney M feat Liz Mitchell were full of great energy and positive vibes of 80’ and 90’ disco music

Hundreds of million of people all over the world have been worshiping the pop band Boney M with Mitchell from the very first day the band was formed.

The organisers of public and private events in Europe, Russia, Kazakhstan, Ukraine and other countries are constantly reaching out to Boney M feat Liz Mitchell on the official website in order to complete their booking.

Boney M with Liz Mitchell are grateful for all the years of love and support from the audience.